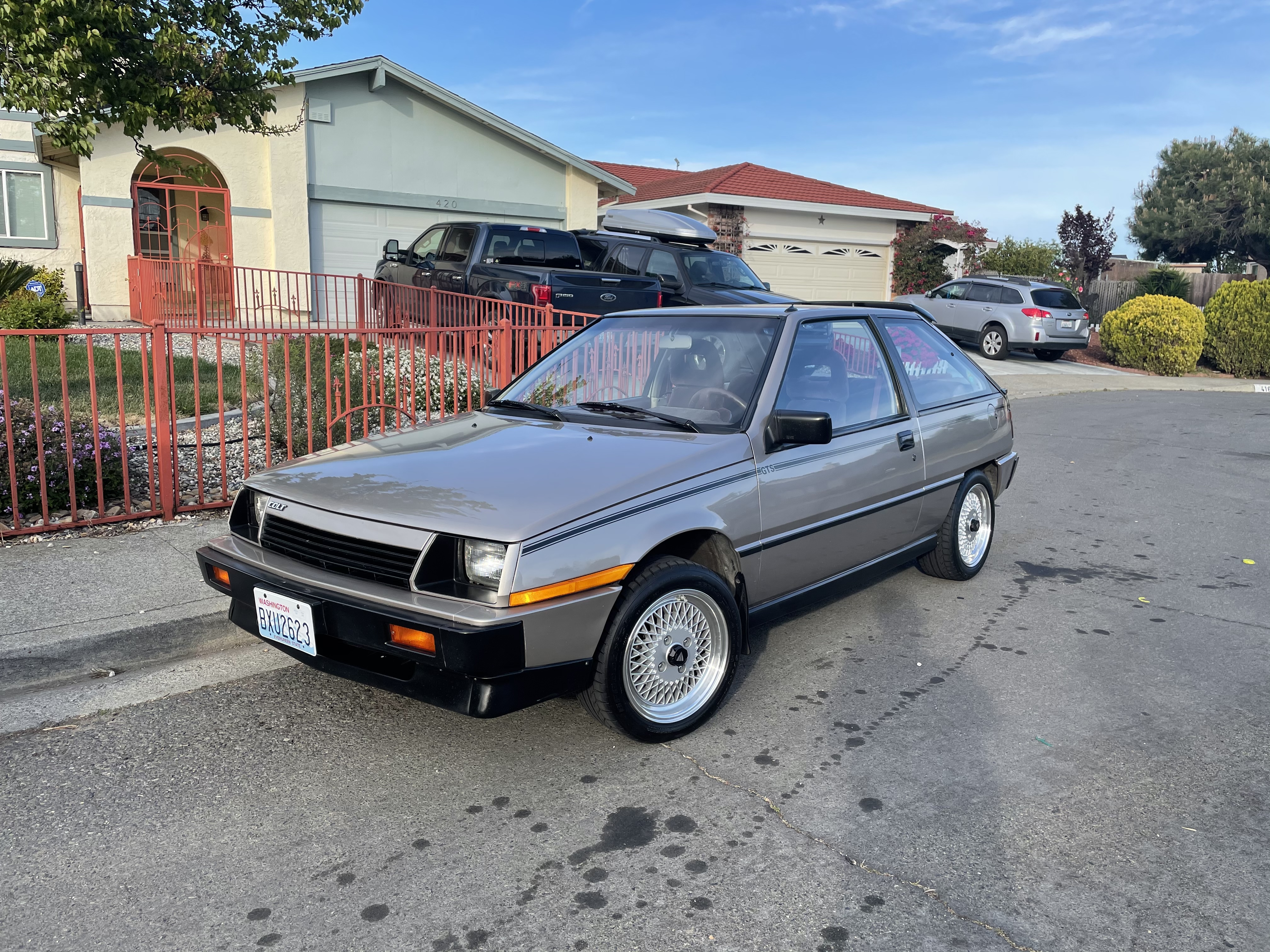 Podcasts. I listen to them almost daily. When I’m getting ready in the bathroom in the morning I listen to car podcasts. When I make dinner in the evening I listen to comedy with an AirPod in my ear. One of my go-to car podcasts is the Driving While Awesome podcast. This pod is produced by three guys living in California who enjoy driving cars made in the 1980s and 1990s. They have dubbed this the “rad era” and they put on a car show called Radwood which has happened (pre-COVID) all around the US and even in the UK. They also organize road rallies in northern California. Their latest venture is “Rad For Sale“, an auction site that features cars, motorcycles, parts, and memorabilia from 1980 to 1999. It is modeled after the Bring A Trailer recipe, with many pictures for each listing, user comments, and bidding extended for a specified period when there is active bidding taking place.

Upon the launch of Rad For Sale, I knew I had to investigate the auction site to see what would pique my interest. I saw Porsches that would attract big money, including a 1988 Porsche 944 Turbo Cup in Reebok livery that would go on to sell for $89,999.99 US (which, by my math, is almost 90 grand). I set my sights on more modest means of transportation. I passed on the Honda Del Sol, an unworthy successor to the CRX. The Subaru Brat looked kind of fun, but it was a bit rough. Then, a 1985 Plymouth Colt GTS Turbo with Enkei 92 15-inch wheels caught my eye. Looking through the pictures, it seemed to be remarkably clean and well-cared-for. I upped the one existing bid of $1,000 by $200 and waited for the bidding excitement to begin. One week before the end of the auction, I bettered a $3,200 bid with a $3,500 bid. Little did I know this would be the last bid of the auction. I cleared my calendar for the bidding end time, ready to compete with all of the other 1985 Plymouth Colt GTS Turbo enthusiasts. As the clock ticked down, I refreshed my browser to ensure I was not missing other bids. The timer read “0:00” and I received notification that I had won the auction. It was a bit of a let-down, reminding me of the 2014 Super Bowl when the Seahawks played the Broncos and the Broncos didn’t show up… happy to have a win but kind of hoping for a competitive game.

I live just outside of Seattle and the car was in San Francisco. By chance, I planned to travel to Sonoma with my NachoFriend Racing team for the 2021 24 Hours of LeMons Sears Pointless race. During the auction, I had asked the seller if he thought the car would be okay to drive from California to Seattle because I would be in Sonoma for a race. He informed me he thought it would be ok, but it’s an old car so who really knows, and asked if I was going to the LeMons race because he would be there with his team. “How perfect is that?”, I thought. Before leaving for the race, I asked my seventeen-year-old daughter if she would be interested in driving it back with me. So long as she got time behind the wheel, she was willing to do so.

I picked up the car, along with promotional material (posters, brochures, and magazine ads) and spare parts on Sunday after we finished racing and returned to our rental house. The Colt was as good as it looked in pictures and was easy to drive with excellent visibility. The gearbox took a little getting used-to, with its long throw, but that’s to be expected when introduced to a new car. Our plan was to drive from Vallejo to Medford, Oregon on the first leg of the trip (a 330-mile drive), before embarking on the final lap home the next day. 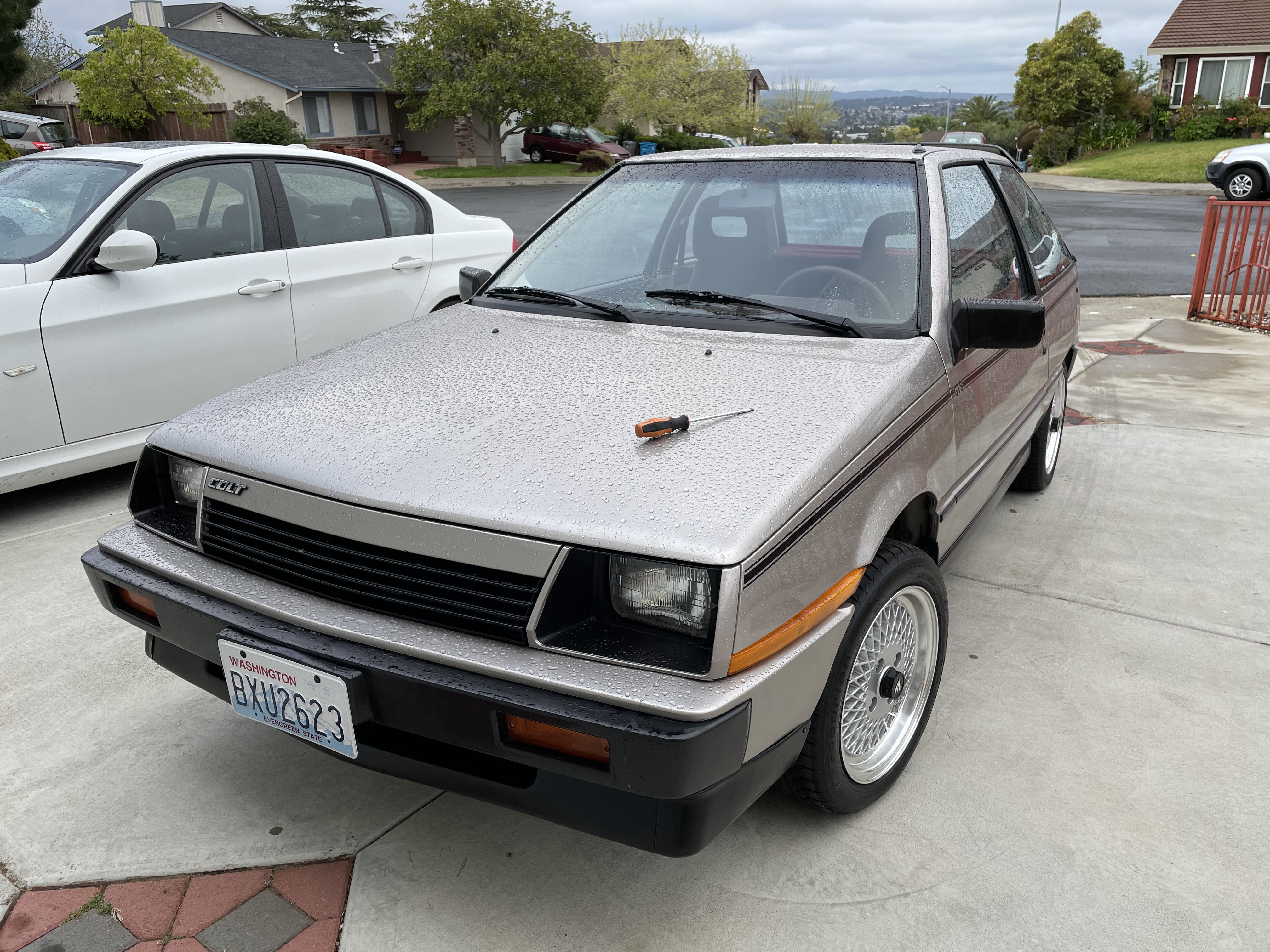 We set out Monday morning with one tool – a screwdriver, which we ended up not using. I drove first. Our plan was to switch drivers after each refuel. Our fuel tank was just under twelve gallons and the little Colt got up to twenty-nine miles per gallon, so our turns at the wheel averaged out to 250 miles per stint. On the freeway, I found the Colt to be quite nimble and surprisingly quick. Its 102 horsepower only has to move less than 1,900 lbs and it has no problem keeping up with the traffic. The temperature gauge never rose alarmingly, though, on long uphill grades, it would rise a bit above the middle mark on the gauge. I allowed a bit more following distance in respect of the small front disc brakes and rear drums, but the braking performance was still adequate. The seats were comfortable and all of the controls are within easy reach. The NVH (noise, vibration, harshness) performance of the car is what surprised me the most. There were no annoying rattles, the suspension is solid as if it has new bushings and there is no wind noise sneaking through the windows, even at speeds above 80 mph.

As we soldiered home, I suggested we stop in Weed, California for lunch. My daughter enjoys shopping at The Weed Store, where she bought an “I ❤️ Weed, California” hoody a couple of years ago. We reached our exit and stopped because there was a sign that read “Stop”. I immediately smelled the strong odor of fuel. My daughter said she thought that was my aftershave. She turned right and I told her to pull over in the parking lot of our destination (the Hi-Lo Cafe) and shut the car off. I opened the hood and asked her to turn the car back on. I immediately saw fuel leaking onto the exhaust pipe and told her to shut the car off. Fuel leaking onto the hottest part of the car is a recipe for a ball of fire. The leak stopped as the fuel pressure abated.

I called AAA and they stated it would be a while, so we went into the Hi-Lo Cafe for lunch. I contacted a local mechanic, Mike’s Auto Complete, and Mike said he was away from his shop for a couple of hours picking up some parts, but I could call back later and he would take a look at the Colt. Reagan and I enjoyed our lunch, walked down to the Weed Store, where she chose a “Weed Fire” department hoody and then waited for the tow truck. We were towed the 3/4 mile to Mike’s so he could diagnose our fuel leak. He identified the culprit as the upper fuel hose and advised us that he would attempt to cut away the bad hose and install couplers to attach to new fuel hose. Since it was past closing time, we would have to spend the night in Weed. 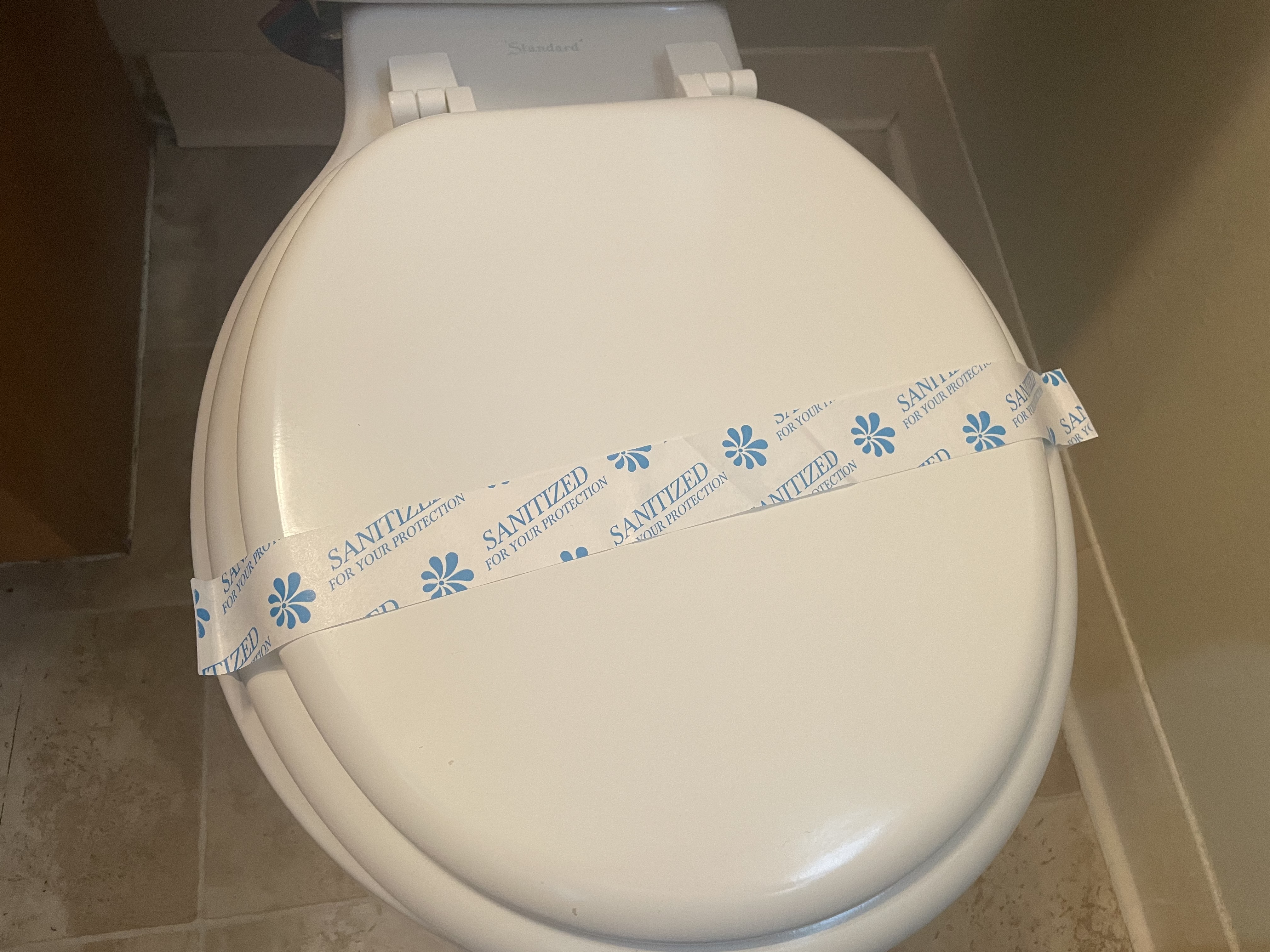 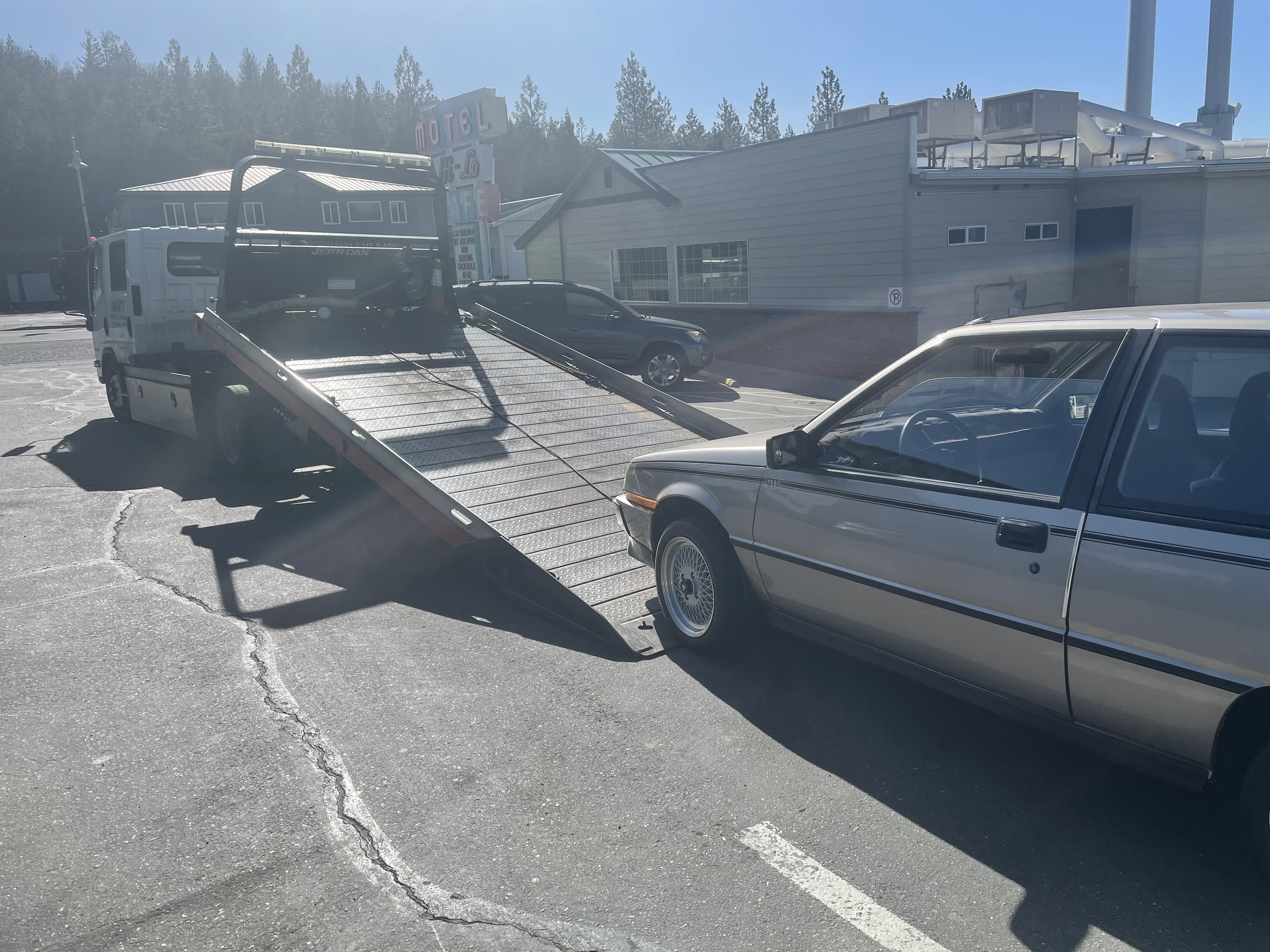 The Hi-Lo Cafe’s parking lot is also the Hi-Lo Motel’s parking lot. Coincidence? We checked into the Hi-Lo Motel. I haven’t stayed in a motel since Nixon was president. The Hi-Lo did not disappoint. Did the toilet seat have “SANITIZED FOR YOUR PROTECTION” paper on the toilet seat lid? Oh, yes it did. A TV that simulates watching with vaseline covering one’s eyeglasses? Of course. It was as if Disney was tasked to create a 1973 roadside motel. I’ll give it this – it was quiet. Weed doesn’t seem the sort of town to have a ton of nightlife. We dined, once again, at the Hi-Lo Cafe. They were out of everything we wanted, so we ordered things we didn’t want. Two Weed firefighters arrived looking for pie, one of whom wore a hoody identical to the one Reagan picked out for herself.

The next morning we dined at the Hi-Lo Cafe once again. I called Mike’s Auto Complete and he said he should be done soon. We walked down to his garage and he explained that he was having problems with the hose because it was basically crumbling in his hands. After 36 years, the hose no longer hosed. The hose had a banjo fitting on one end and a straight threaded fitting on the other. The fittings were crimped on. Mike said he would attempt to cut off the crimped collars from each end of the hose, remove the fittings, transfer them to new fuel injection hose and then hydraulically crimp on new collars to the old fittings and new hose. If this didn’t work, we would have to spend eternity in Weed, California in a nightmare Twilight Zone episode. I said “Mike, you can do it. Make it happen.” Mike is a quiet, older ex-drag-racer. He was the guy anyone would want working on their 1985 Plymouth. When new o-rings were required, he searched his box of miscellaneous o-rings and found a pair that fit. He just got things done. And finally, on a sunny Tuesday afternoon in Weed, he started the Colt and his job was complete – no more leak. The drive home from Weed was joyously uneventful.

I’ve taken the Colt to one Cars and Coffee event. It’s a friendly little car that encourages others to remark on its condition and rarity. It’s almost impossible to not describe it as cute. I’ve driven it to work several times and appreciate its fuel efficiency. It lacks air conditioning and I expect that will limit its use this summer. The preponderance of windows that make visibility so good, will also turn the interior into a sauna on a hot July day. My plan with the Colt is to leave it as-is, perform maintenance, and any other repairs that may be required. It’s a fun driver that draws attention from a unique type of car enthusiast and I expect it will be an enjoyable experience.